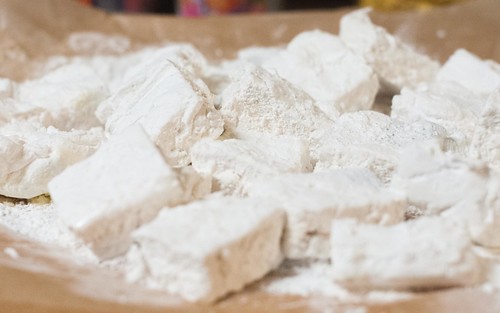 When I told my husband I was going to make homemade marshmallows he gave me The Look.

After almost 12 years of marriage I am familiar with The Look. It’s when I get some wild idea and my stubbornness takes over and come hell or high water I’m going to do it that I get The Look. Meaning: “Why don’t you just go to the store and get _____? [insert random food like edamame or butter or chicken breasts or a whole host of other things] instead of growing/making/butchering/making a big old mess in our teeny tiny kitchen like you’re about to do?!”

Oh, silly man. I am way too determined/created/insane/delirious to do that! 😉

And that’s why this weekend I made homemade marshmallows.

Which got me to thinking: What are homemade marshmallows unless they have homemade graham crackers to go with them? Because, COME ON, you can’t put something so delicate and sweet and delicious over just any old simple store-bought cookie. Nope.

But I’m going to let you in on a little secret: neither one of them are hard to make. Sure, the marshmallows take 24 hours to do their thang, but it’s not hard as long as you have a candy thermometer. And the graham crackers are just like making any cookie you need to roll out. Pinkie promise.

Let’s get this party started.

First, do the marshmallows ’cause they have to sit there getting all ready for the s’mores shindig for 24 hours first. This is a link to my marshmallow recipe (here’s a .pdf version of the recipe). 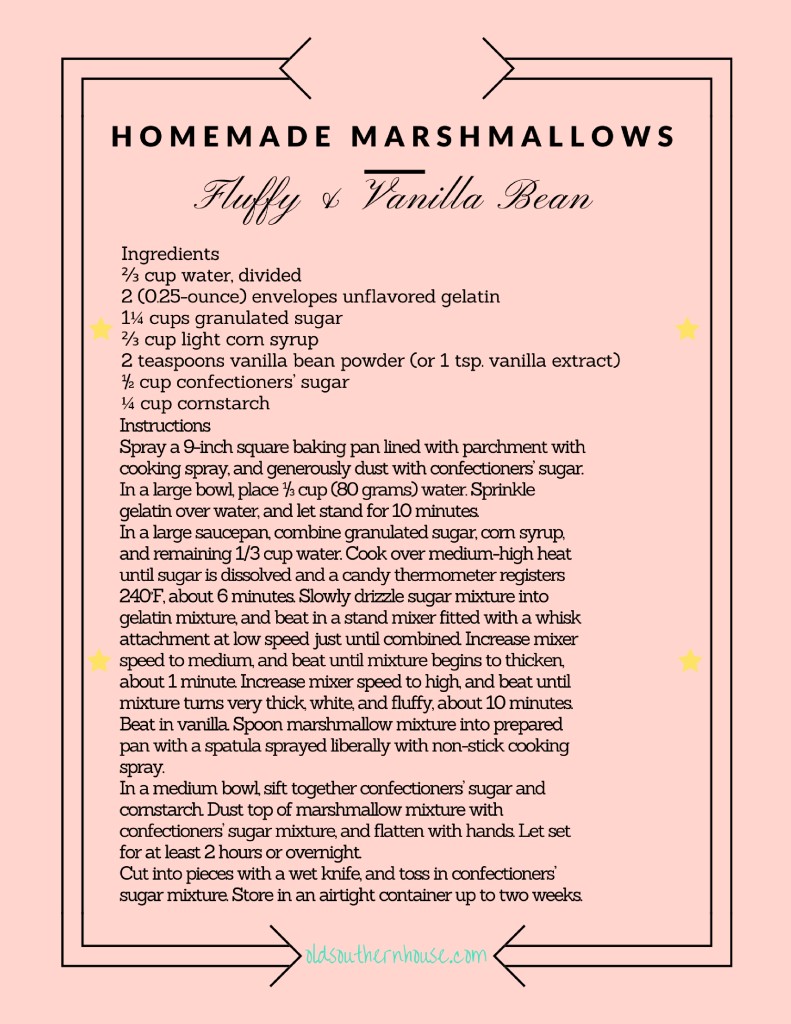 There are two things you need for marshmallows. Well, I guess technically just one. You HAVE to have a digital thermometer. This is the one I have and it’s less than $7 shipped (I also love this one that is a spatula and thermometer in one–how fabulous is that?!). The second thing you “need” (but could substitute) is the vanilla powder (it’s $8.45).  It keeps the marshmallows whiter than if you use vanilla extract. You can also use it to flavor smoothies/coffees/etc. 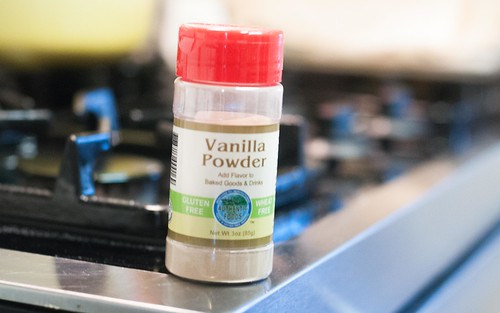 Oh, and note: the gelatin smells ridiculously foul. Moseby said it smelled like “dead poop”. I don’t know what dead poop smells like exactly, but it sounds about right. Just warnin’ ya. But somehow, someway, that gross icky gelatin becomes something amazingly tasty.

A couple of pictures to show you the process. This is what the sugar/corn syrup mix looks like at 240 degrees {this is called the “soft ball” stage}. 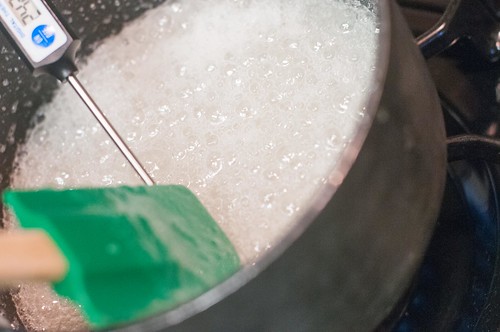 This is after the gelatin and sugar/corn syrup have been mixing for ten minutes. I’m showing this because it’s one of those hard things to know what to look for. 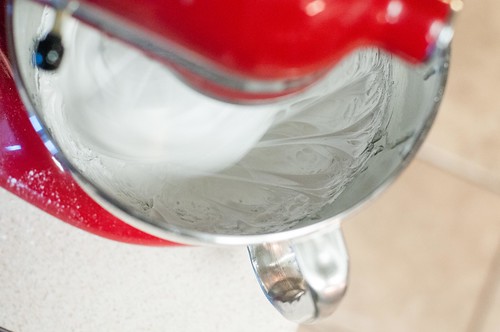 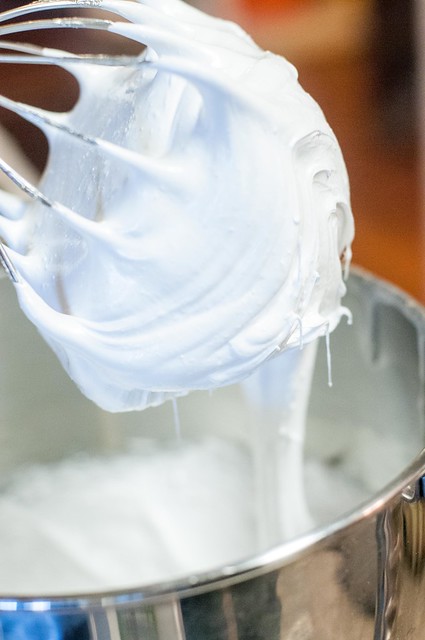 And this picture? This is what NOT TO DO. Of course, I’m only demonstrating this for instructional purposes. Rigggggghhhht…. 😉 Actually, I forgot to spray the spatula with non-stick cooking spray and then I just tried to spread it with my fingers. #epicfail {photo courtesy of MM who thought all of this was hilarious} 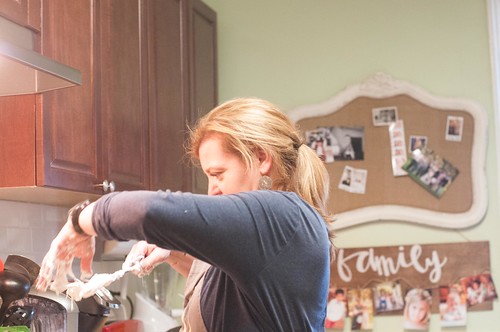 This is how you’ll store it for 2-24 hours (room temp) before cutting. I did lay a towel lightly over mine because at our house, who KNOWS what would land in there if I didn’t! 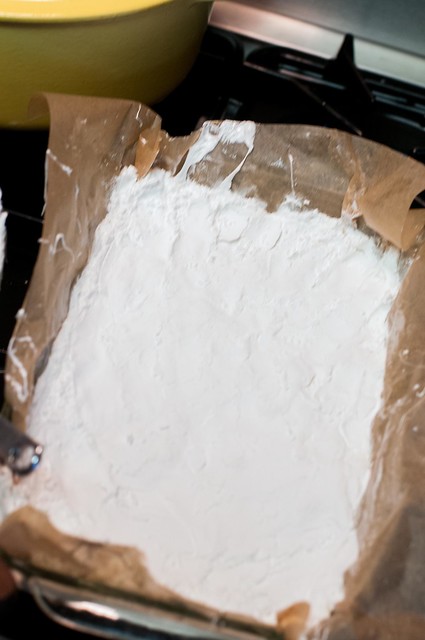 And this is them after they’ve been cut. Yum! They are SO GOOD. 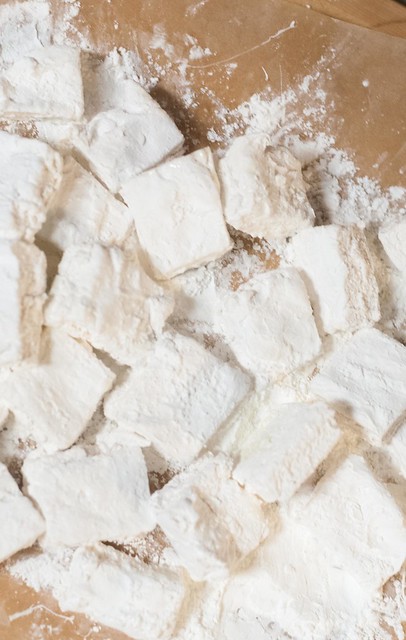 Next, let’s do the graham crackers. (Here’s a .pdf version of the recipe) 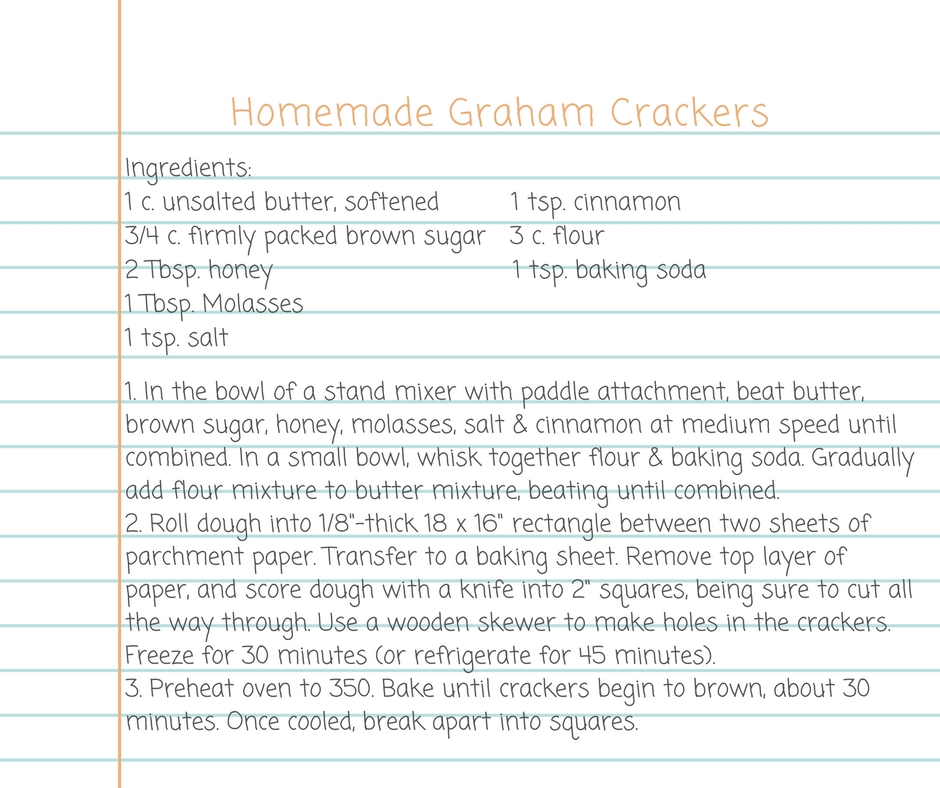 This is the dough after I rolled it out. Rolling it between two sheets of parchment paper saves all the mess of using flour. 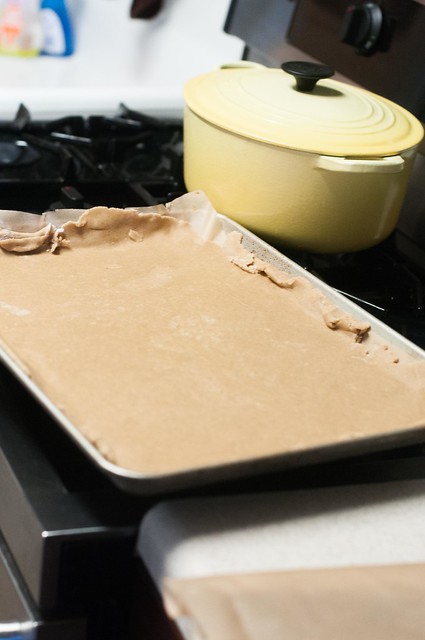 You score it with a skewer and then you refrigerate or freeze it. After that, you bake (don’t remove that bottom layer of parchment or anything)! {Notice my untraditional dots? I made some Ms and hearts and things like to impress my kids. When in actuality, they didn’t even notice. Ahem.} 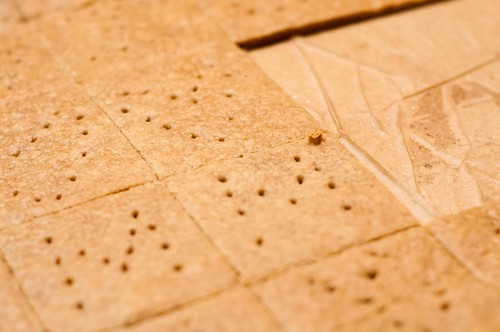 They look pretty dang good, huh? And they are SO MUCH better than store bought ones. 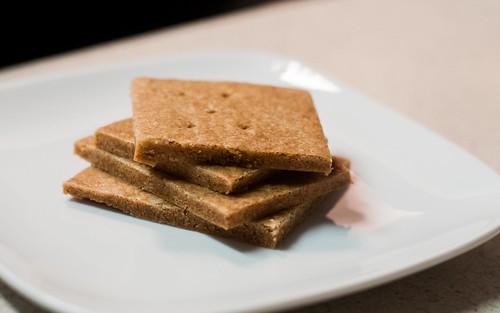 Now it’s time to make you a big old s’more (we prefer to roast them under the broiler instead of messing with a campfire) and get as messy as humanly possible. My kids nailed it on the first try. 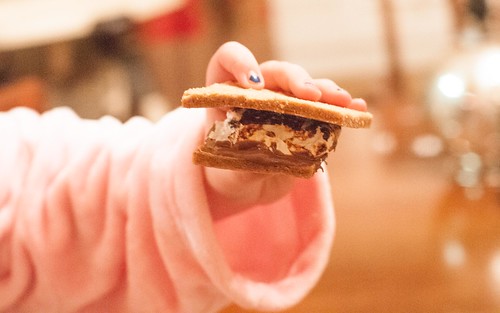 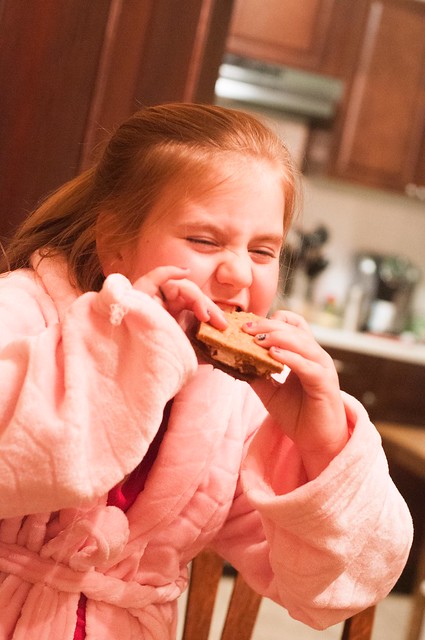 We do our best s’more taste testing in our jammies of course.