Let’s see. Where were we?

The old addition from the 1910s (bathroom & sleeping porch) had been removed. The land had been graded. The foundation was poured. The walls and roof were framed. Windows (but no doors) were installed.

I think this is the last photo I showed you. 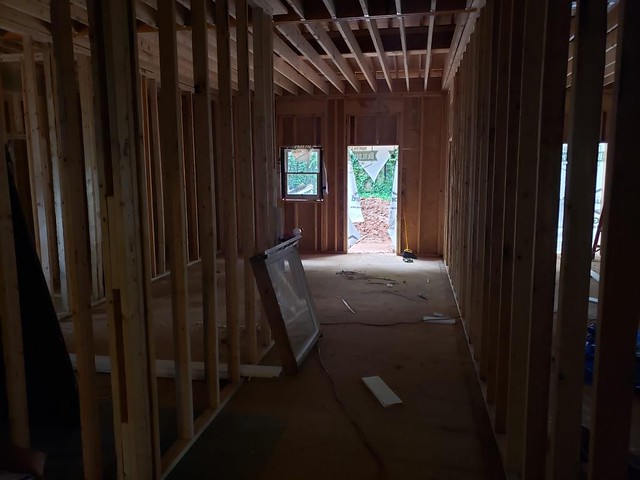 That week we picked out countertops for the kitchen (quartz) & master bathroom (Jerusalem stone).

I’m not sure if I mentioned this or not, but when they were framing the addition in July they hit a wire (that we thought was dead) and half the lights went out in our house. Turns out even though we paid to have the house rewired in 2007, the only rewired half (maybe even 1/3) of the house which meant some of the dead wires were actually live. Soooooo we got the super fun news that we would have to pay to have it rewired a second time (by different electricians of course, HA!). WHAT.A.MESS.

Not only did we have all the dust from the addition, but now we had dust all in our house because they were having to cut through our ceilings (wood) and floors. Fun times. BUUUUUT after 6 weeks with only a little bit of power (no lights in our closet or bathroom, for instance) we finally could see again!

The last week of August they demoed my current kitchen. (For those keeping track: we lost our laundry room and downstairs bath in mid-May and then our kitchen in August. There’s six of us sharing one bathroom right now. There’s no kitchen. And I have to take laundry to my parents’ house every day. …and there’s no end in sight to this madness.) 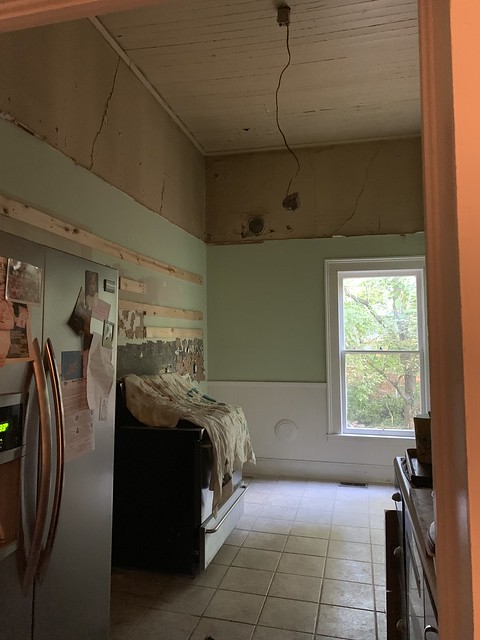 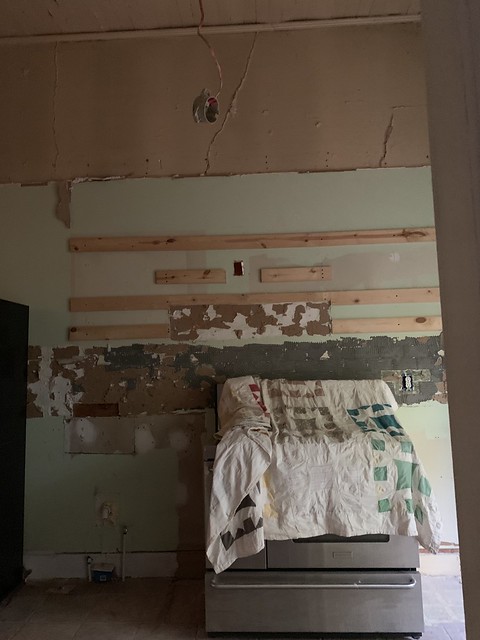 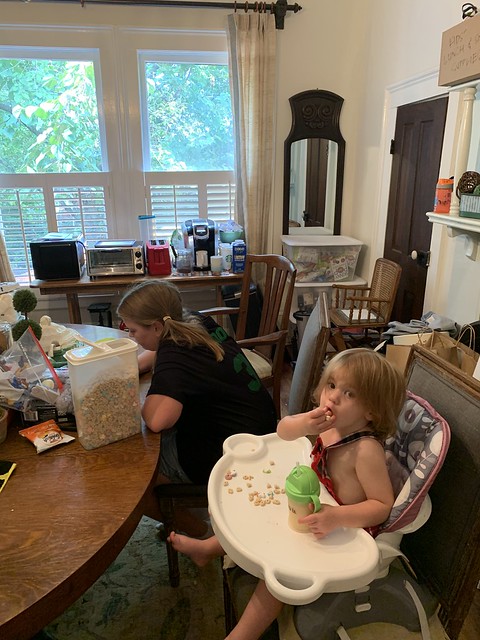 Our current kitchen and dining room and storage room and Lego building room and homework room all rolled into one. (Our refrigerator is in the middle of our hallway.)

Mary Margaret’s bathroom (in what was the old kitchenette in the boarding house) also got demoed and she was on cloud nine. 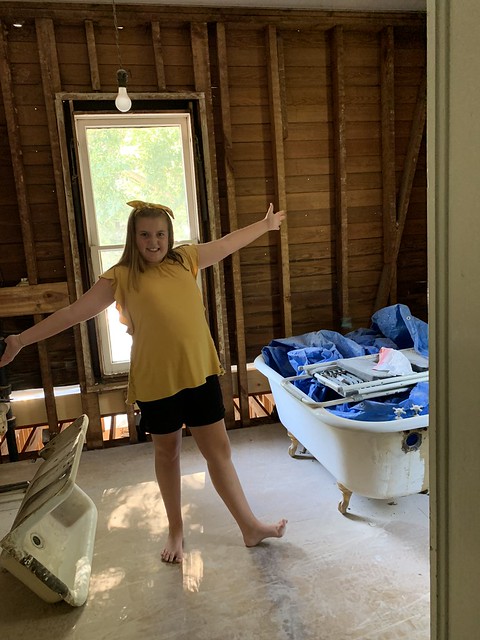 In early September we had wiring, plumbing, and HVAC vents ran. They also blew in the insulation and started on the metal roof. That took a few weeks. 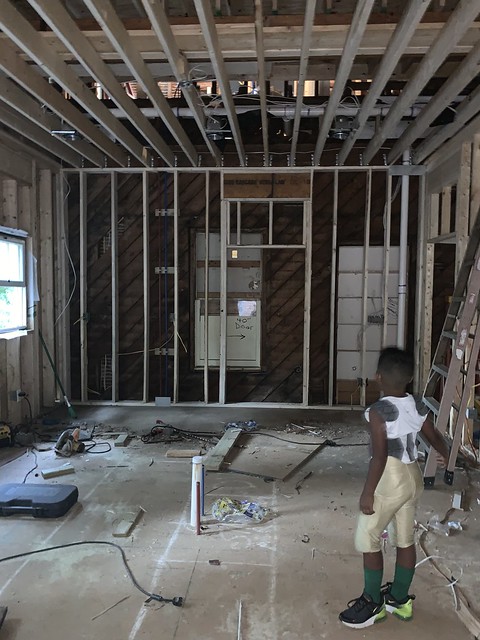 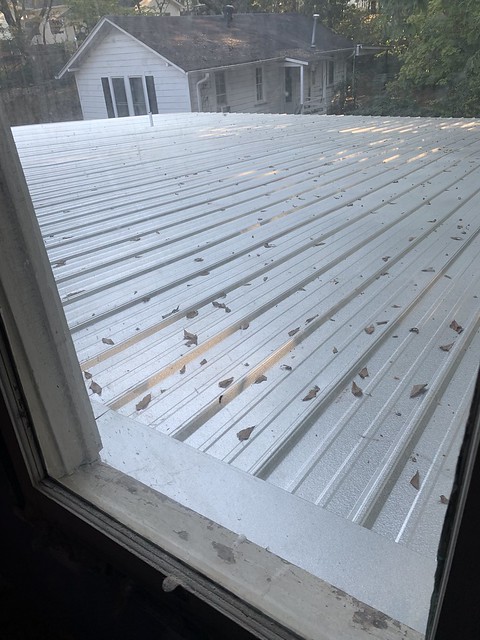 We met with Gina Sims Designs about this time. I’ve been struggling all along about what color to paint the kitchen cabinets. I knew I wanted a greige on the walls, but the cabinets were a struggle (we’re having brick floors and a green backsplash and a grey tile surround on the fireplace–so lots going on!) and it was so nice talking to her and my high school friend, Meredith, about what we should do. We settled on Smokey Taupe (Benjamin Moore) for the cabinets, Wind’s Breath for the walls (Benjamin Moore), and Fort Pierce Green (Benjamin Moore) for the mantle. She also talked me into staining the island which we hadn’t planned on doing, but now I’m really excited about that. 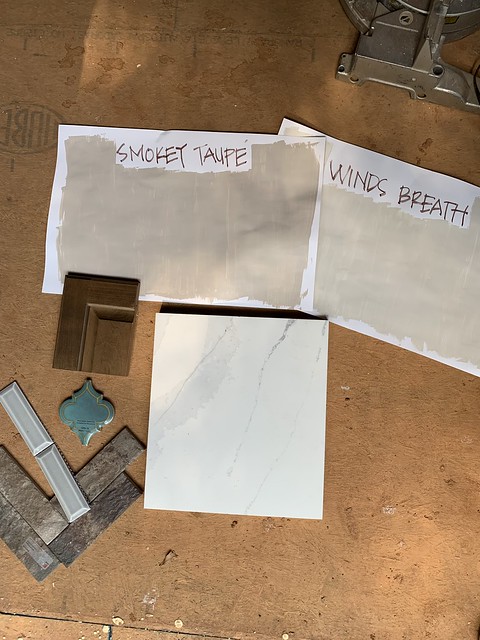 That week we also finalized appliance choices. I went with a brand called Dacor. We spent HOURS at a showroom one morning and I looked at every brand you can imagine. In the end I liked the Dacor cooktop the best so that’s what I went with (it’s 48″, but I’m adamant about NOT wanting a builtin griddle/grill with it–just gimme allllll the burners!).

At the end of September they started the dry wall process. My kids were fascinated with the men on stilts and spent A LOT of time staring at them through the door! 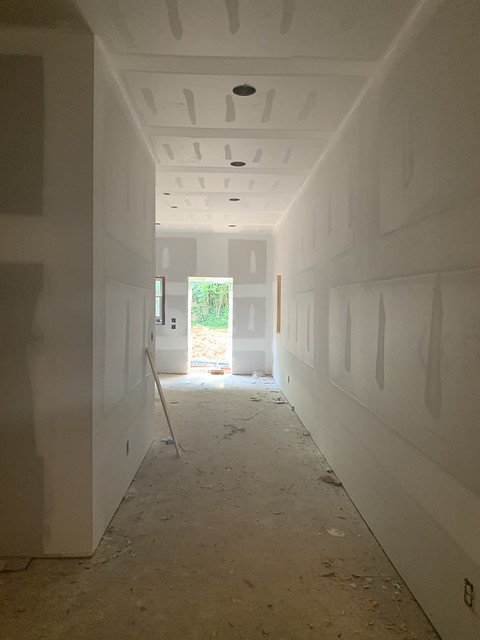 This is the hallway looking towards the back door. 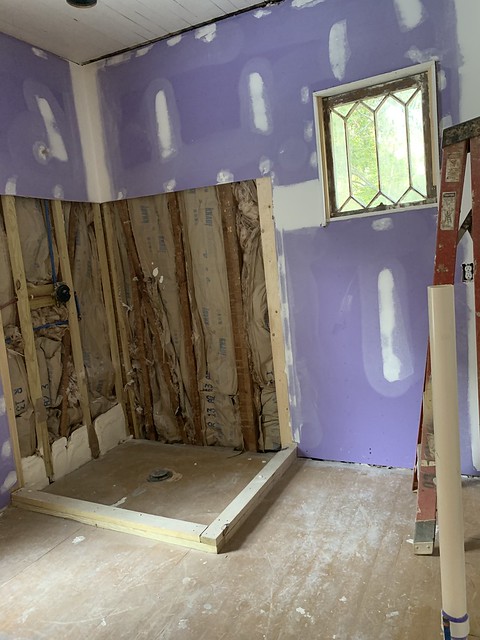 This is MM’s bathroom.

The first week of October they started adding the tongue and groove ceiling to the addition to match the rest of our house. 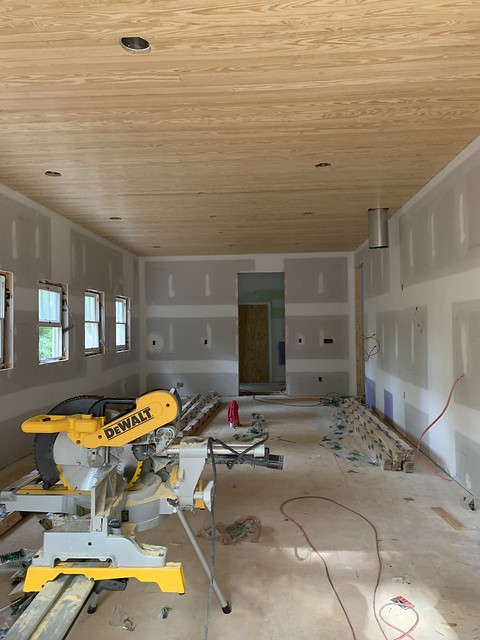 In mid-October they framed in our two sets of doors in the addition–our old back door was re-installed, as well as a set of French doors we found at Scott’s. 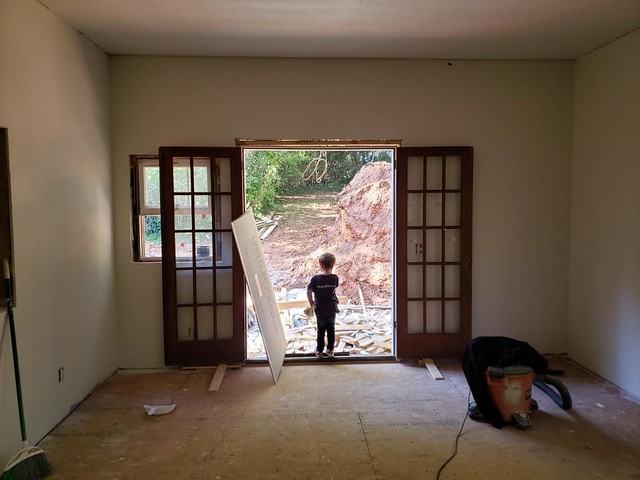 Last week they started putting the Durock down to get ready for the tile to be laid. 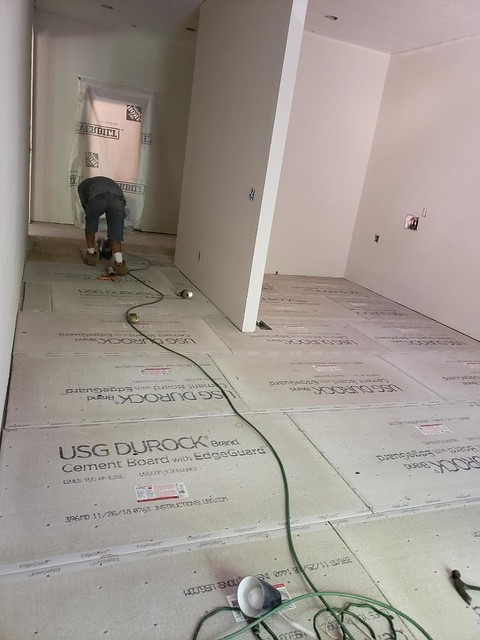 This is the back door looking towards the laundry room on the right and towards the front door. 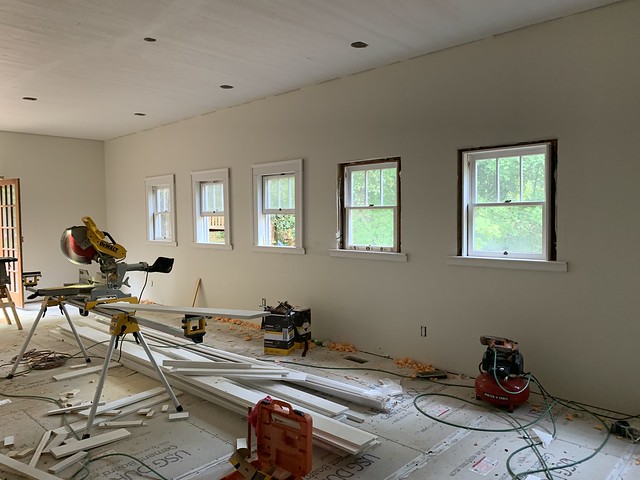 We also got some of the trim and wainscoting installed in the hallway of the addition (to match the original hallway). It’s tongue and groove so it takes longer to install than the large sheets you can buy. 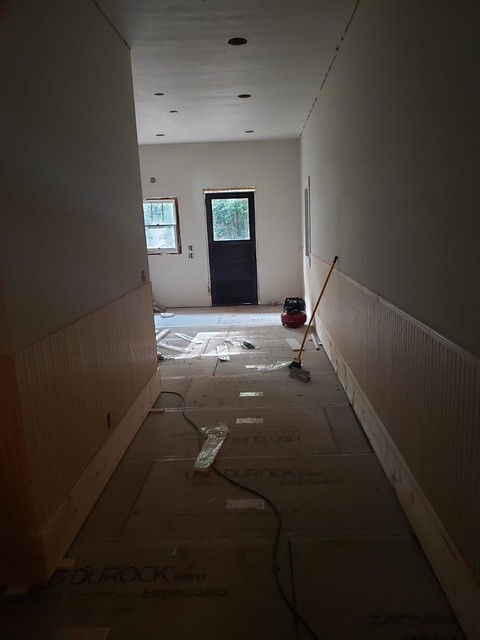 And that’s where we are.

In some ways so much has happened and in some ways it’s crawling slower than a snail’s pace. Our contract says it’ll be ready by Halloween, but well, that’s in ten days and I don’t even think we could make that date if they worked around the clock 24/7 til then.

And it’s disheartening because we’re living in two rooms (the living room and dining room) downstairs and three rooms upstairs (one bathroom and two bedrooms for six of us). The kids sleep on the floor, half of our lives are in boxes, and the other half? It’s scattered around the house, piled on top of each other and everything we own is covered in dust. We have no kitchen sink (or drain) so I pour out old drinks off our porch and then wash them in the bathroom sink.

Our lighting takes up the entire parlor, there’s an extra mantle in the downstairs bedroom, the faucets are in the living room, the (oh so beautiful black walnut) laundry room island top is propped up in the dining room. Thankfully the cabinet guy and the countertop guy and the appliance guy are all keeping our stuff at their warehouses/shops or we seriously wouldn’t be able to move.

I keep telling myself I’ll be okay if it can get done by Thanksgiving, but anything longer than that and I’ll be 100% over it (we’ve been living in this state for 5.5 months now) because there’s no way I can decorate for Christmas with the amount of boxes in this house–there’s just physically no room. I’m kind of having a pity party about it all right now. Okay, who am I kidding? I AM having a pity party. We have such a long way to go and I’ve kind of getting to the point where I don’t think we’ll ever actually finish it. HA!