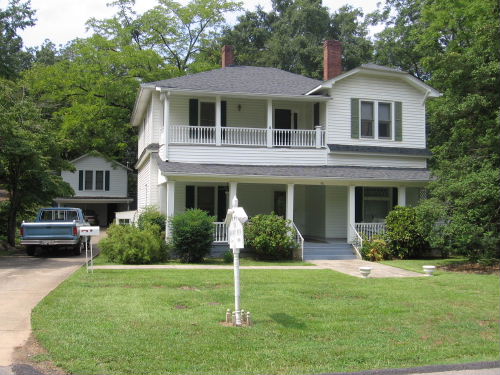 Since late summer of 2005 we had been on the hunt for the perfect big, old house to restore in the Atlanta city limits–mainly because there are so few of those kind of homes in my hometown (which is where I really wanted to live).  My mother was actually the one to first see the for sale sign at Brogdon House when she was on a Sunday drive and called me.  I didn’t believe her when she said it was for sale (it had a tiny 8″ x 10″ for sale by owner sign in the front yard)–after all, it had been in the same family for 90 years.

We called Miss E. and played the Small-Town Name Game.  She had to make sure we were, in fact, from the town since my married last name is not common here–she said she refused to sell it to anyone she didn’t know.  Once she realized she had worked with my paternal grandfather, frequented my maternal grandparents’ store, and her niece was good friends with my mother we became “good people” in her eyes and were allowed to come her home.   We made an appointment to see the house on July 3, 2007.  When we went to see the home it was treated as if we were just visiting with her.  No talk of the price, the structural aspects, or timeline was put on the table.  The next three months were like a dance to get this house.

The rest, as they say, is history. 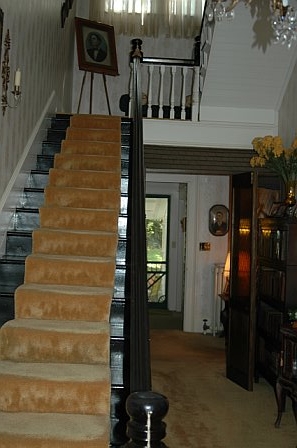 The downstairs hallway.  It was all in glory of the 1970s: the brown carpet, the dropped ceiling, and the faux glass (aka plastic) room dividier.  But even through all that I could see the diamond shining through the rough.  There were original doors, windows, hardware, mantles, tile, summer screens–you name it.  I had to have this house because it was what I had dreamed of and had been looking to find for the last two years. 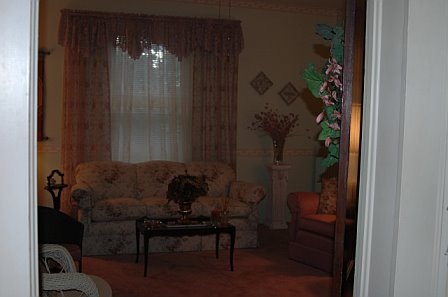 Wow, we loved some pink didn’t we?  Why yes, in EVERY room downstairs there was pink carpet *and* pink drapes.  Through the thick drapes in the parlor I spied a large stain glass transom.  Even though this was the first room in the house she showed us I was already sold. 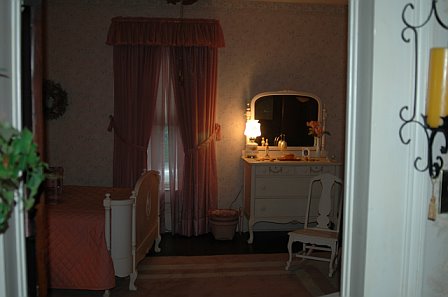 This was being used as a second downstairs guest bedroom. However, we decided five bedrooms were enough for us (it’s just the two of us..for now) and made this into our living room. 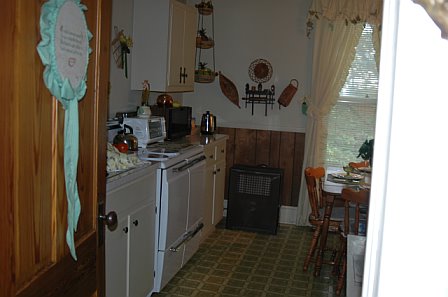 Oh, poor, poor, tiny kitchen, but I didn’t mind.  It’s funny when I was looking for our previous house in 2004 all I cared about was how nice the kitchens and baths were, in this case I didn’t even care what those looked like because I knew we would redo them. 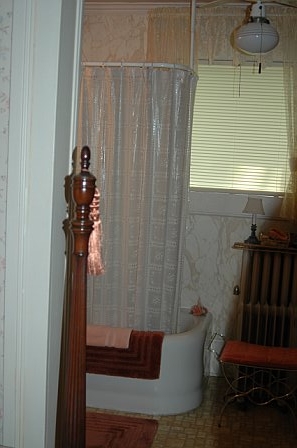 The downstairs bathroom with the two radiators, plastic 50s marbelized paneling, and the 60s lineoleum. 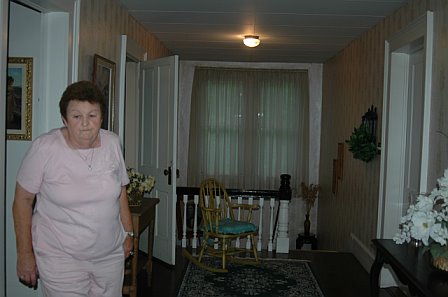 This picture shows you the wallpaper that was throughout the house, as well as what the dropped ceilings looked like in the hallways and a bedroom. 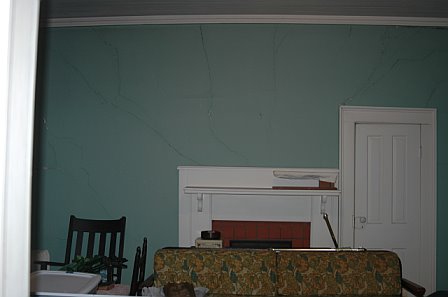 One of the four upstairs bedrooms.  It had been used as storage since 1959.  There was no heat (and certainly no AC!) in this room for almost fifty years and the plaster was just a mess…so much so it all had to go. 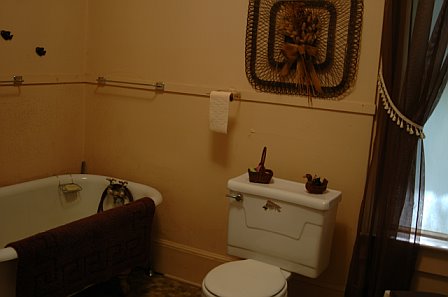 The master bathroom upstairs.  The plumbing had been shut off in 1959 and this was how it was left (including an almost fifty year old roll of toilet paper!!).  Everything was peach and black–such a delicious color combination, I know.  Every piece of plumbing had to be ripped out and redone.

More Before Pictures (click on the thumbnails for bigger views):

Upstairs floor condition (that rocker is now in our living room, b.t.w.)

What a *beautiful* kitchenette.  Ha!

Dryer on the back porch.  This was one of the only things I pitched a fit about during the redo.  Everyone said to just leave it, but I refused.  We ended up dividing the bathroom and making me a laundry room–a *tiny* laundry room–and this became the mudroom.

Yellow bedroom (now the study/guest bedroom #4).  In many of the rooms there was just one color, for instance, this is the yellow room–everything is yellow.  There was also a pink room and a blue room where everything–including the ceiling, trim, windows, radiators, and sometimes floor was the same color.